Busy bluestem is unique among Andropogon species due to its preference for moist or wet soil. 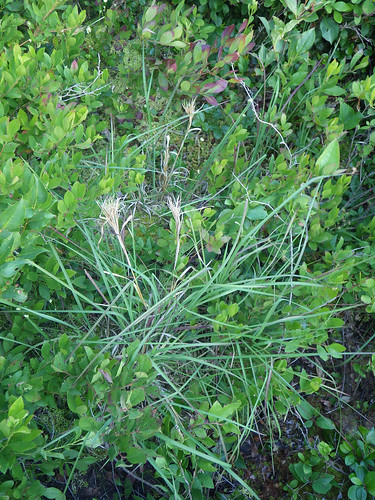 Bushy bluestem (Andropogon glomeratus) is an erect, tufted perennial grass that may grow to 1m tall. The leaves have narrow, elongate blades approximately 3-6mm wide, and tend to turn copper to orange in the fall. The individual flowers are minute and are grouped in small spikelets that are surrounded by fluffy, gray-white bristles. Numerous groupings of the spikelets are aggregated together to form a bushy terminal cluster, which give the plant its name.

The PA Biological Survey (PABS) considers bushy bluestem to be a species of special concern, based on the few occurrences that have been recently confirmed. It has a PA legal rarity status of Undetermined and has been assigned a suggested rarity status of Rare by PABS. About fifteen populations are currently known from the state.

The bushy bluestem grows in a variety of damp to wet open places, clearings, and sometimes in human-created disturbed ground.

In Pennsylvania, it has been documented historically in scattered locations, particularly in the southern counties.

The populations of bushy bluestem in the state are threatened by human-related habitat loss, natural succession, invasive species, and the indiscriminate spraying of herbicides.

Given the preference of the species for open habitats, active management – such as fire, mowing, or invasive species removal – is often
required to maintain the proper successional stage at sites where it grows.